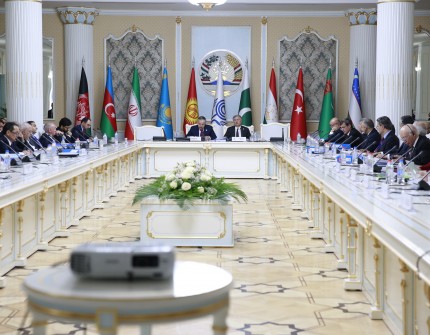 During the meeting, the Foreign Ministers of ECO member states discussed the status of implementation of ECO projects and programs, the relationship of the ECO Secretariat with international organizations, the activities of specialized agencies and affiliated bodies of the Organization.

During the meeting, the participants exchanged views on the progress and assessment of the implementation of the goals and objectives identified in the document "The Perspective of ECO 2025", the adoption of the new Program of the Economic Cooperation Organization of assistance to Afghanistan, administrative and financial issues of the Organization.

In his speech, the head of the Turkmen delegation noted that as a priority of the ECO Turkmenistan sees development of cooperation in the transport and energy spheres, which objectively act as the defining trend of global economic growth. "Timely and actively integrate into this process, using the existing competitive advantages, to ensure the role of a full and effective participant in the formation of new transport and transit corridors, energy routes - such, in our opinion, should be our common pressing tasks for the foreseeable future," stressed the Minister.

Economic cooperation in the space of ECO should be accompanied by the expansion of interaction in the cultural and humanitarian sphere. In this regard, the delegation of Turkmenistan underlined the expediency of the beginning of the formation of systematic plans for cultural events, the organization of arts festivals, including the participation of children's and youth groups, meetings of the creative intelligentsia of ECO countries.

Also, a meeting was held with the Secretary General of the Economic Cooperation Organization.